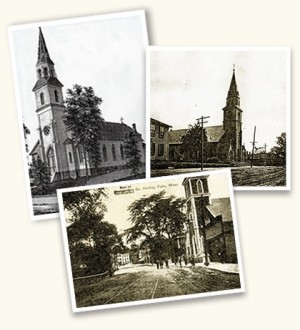 Saint Patrick’s Church was the first Roman Catholic parish in South Hadley, MA. It was established in 1867 by Monsignor Patrick J. Harkins as a mission of St. Jerome’s Church in Holyoke, MA. The first mass was held on Christmas day in an as yet unfinished church built on North Main Street. At that time there were only eighteen Catholic families. Since no bridge existed, the only link across the Connecticut River was by boat or ferry with no crossings possible in times of ice or high waters. This mission church continued until July 18, 1878 when it became a separate parish with Reverend  David F. McGrath as the first resident pastor.

It is interesting to note that in 1878, the rectory was also used by the Sisters of Providence as an orphanage and hospital. This continued until the Providence Hospital was built later that year and until 1881 when the children were transferred to the Brightside Institute for Boys and the Mount Saint Vincent Home for Girls.

A change in leadership took place when Reverend Lawrence Dervin became pastor in 1882. In 1884, Michael Lynch donated several acres of land to the parish and St. Rose Cemetery was created.

The following year, Reverend Eugene Toher became the new pastor. It was under his administration that the church was moved from the North Main Street site to its present location on Main Street. He was also responsible, in 1891, for the establishment of St. Anne’s in Chicopee as a mission from St. Patrick’s parish.

Reverend Toher was succeeded in 1901 by Reverend John F. Conway. During his tenure, St. Anne’s grew and, in 1912, became an independent parish.

St. Patrick’s parish also continued to grow in 1913 under the leadership of Reverend Dennis Sullivan and then under Reverend Humphrey J. Wren who served from 1913 to 1933. It was in this period that land was purchased  at Boynton’s Curve on Newton Street  in anticipation of future needs in the Woodlawn and Center sections of the community.

Reverend James W. Casey served as pastor from 1933 to 1944. His accomplishments were a tribute to his faith for this period saw the church assailed by floods, hurricanes and fire. The receding flood waters of 1936 left the church so badly damaged that it had to be practically rebuilt. While this work was being carried out, mass was offered in the Town Hall auditorium and at the Woodlawn School. Bishop Thomas M. O’Leary was so impressed by the Woodlawn area attendance that, in 1937, he authorized the erection of the Chapel of the Little Flower on the Boynton’s Curve site which had been so wisely purchased  for this anticipated expansion.

In 1938, with the rebuilding finally completed, the Connecticut River floodwaters and an accompanying hurricane once again damaged the church. No sooner had the repair work been completed when the church was gutted by a fire. Father Casey stoically rebuilt the church once again.

Monsignor Martin J. Tracey became pastor in 1944 and served in that capacity until 1950. During this period, he built a rectory for the Little Flower Chapel which, in 1946, became  St. Theresa’s parish. St. Patrick’s is understandably proud of the two excellent parishes which it helped to establish.

In 1950, Reverend John H. Engstrom became pastor and almost immediately began plans to refurbish the church. The modernization was completed in 1952. Father Engstrom was also concerned  about meeting the recreational needs of his parishioners. Plans were made which resulted in the opening of the St. Patrick’s Social Center in 1954.

Following the untimely death of Father Engstrom on September 25, 1969, St. Patrick’s was blessed on October 11, 1969 with Reverend Thomas J. Price. During the ensuing years, many changes were accomplished. Srs. Sheila McGuirk and Judy Rosenthal became the first Pastoral Ministry team. The altar was repositioned to allow the congregation to truly share in the celebration of mass. Confessionals were renovated in keeping with changes  in the penitential rite.  St. Rose’s cemetery was enlarged with a new fence installed.  The first Parish Council was elected in 1973.

On June 2, 1982 the parish was once again saddened by the sudden death of Father Price. He was replaced on July 31, 1982 by Reverend Brian Boland. Father Boland oversaw renovations to the Social Center and the establishment of a church renovations committee. In May, 1991 Reverend Mr. John Bledsoe became our first Deacon. Father Boland died unexpectedly on March 3, 1994.

Reverend Richard M. Turner arrived on April 21, 1994 and proceeded to spearhead the implementation of the church renovations. The work included Father Boland’s dream of a new steeple at the Main Street side of the church, a new roof, new exterior siding, repainting of the interior as well as new carpeting and altar furnishings. Under Father Rick’s stewardship, the rectory and garage also received new roofs and siding.

On December 1, 2001, Father Rick left to return to St. Patrick’s in Chicopee where his administration would include an elementary school.

Reverend John K. Sheaffer was transferred to  St. Patrick’s in December of 2001. During his tenure, a church website was established and Sister Catherine Ormond was chosen to be our Pastoral Minister. Sister Cathy continued in that position to minister to the many needs of our parishioners until November 2018. Father Jack was called in August of 2002 to serve the needs of Holyoke Catholic and Cathedral High Schools.

In September of 2002, Reverend William C. Rousseau came to our parish. He worked closely with the Spiritual Life Commission to provide additional opportunities for growth within the church  community. Father Bill left at the end of May in 2003 to return  to St. Anne’s in Chicopee where he had once served.

St. Patrick’s was pleased to welcome Reverend Thomas M. Shea on June 7, 2003. One of his immediate responsibilities was the renovations of the Social Center.

The parish is blessed with an active Ladies Guild which gathers the women for many social and fund raising activities. The K of C Council 1721 serves the parish in providing monthly suppers and breakfasts. The Scouting program and CYO offers many youth activities.

The Parish Pastoral Council has led the parish in providing the St. Patrick’s dinner, picnic and meat pie supper. They support our infant & toddler program, welcome new parishioners, prayers for peace and vocations.

St. Patrick’s began involvement with the Diocesan wide Take & Eat Program. The churches of South Hadley and Granby bring home-cooked meals on wheels to the homebound in the towns.

In addition, St. Patrick’s has been part of Habitat for Humanity and joining with neighboring churches, home ownership has been offered to two families.

In 2012 the parish organ was replaced with an updated Allen electric organ.

In 2013, St. Patrick’s undertook improvements to our parish. The church was painted, decorative medallions of the four evangelist enhance the church sanctuary.

The parish experienced a change of leadership in June of 2015. Deacon John Bledsoe retired after 24 years of devoted service and Fr. Tom Shea went into retirement after spending 12 years at St. Patrick’s. The parish welcomed Fr. James Nolte in July 2015, and was named Pastor in July 2016. Fr. James was ordained in 2012. He brings a rich background in law and education.

In the summer of 2016 we welcomed Susan Napolitano as our new Religious Education director. Susan did a wonderful job and retired in November 2018.

Fall of 2016 we were blessed to have David Bergeron as our maintenance manager and in the spring of 2017 as a newly ordained Deacon assigned to St. Patrick's.

After 17 years as Pastoral Minister, Sr. Catherine Ormond is closing her time at St. Patrick’s on November 17, 2018.

From the eighteen families in 1867 St. Patrick’s parish has grown to over 1650 families and over 4,000 parishioners. We have been truly blessed.

For all of our many blessings, we thank the Lord!